Hideo Kojima is nothing if not a genius. Responsible for the iconic Metal Gear franchise, the Japanese game creator has a number of critical and commercial hits to his name, including 2019’s DEATH STRANDING. But at Gamescom in August, Kojima announced a different sort of project: a Spotify Original podcast. Premiering today, Hideo Kojima Presents Brain Structure offers listeners unique insight into how Hideo finds inspiration for his projects and how the creative process works at large.

Fans can tune in for talk show–style discussions on a wide range of his favorite topics, including games, movies, books, art, philosophy, and the social landscape. Kojima has invited special guests across business, technology, and entertainment to discuss compelling themes centered around creativity, and each episode of Brain Structure will also feature a special segment on the latest gaming news from prominent games journalist Geoff Keighley.

For the Record had the opportunity to catch up with Kojima and discuss what fans can expect from the podcast, what makes his approach to video games unique, and how his many different interests have inspired his work as a game creator. 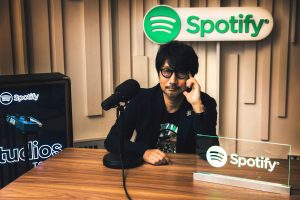 Brain Structure is an interesting name for a podcast. Can you tell us a little about the meaning behind the name and what fans can expect from the show?

In the past, creators were not supposed to talk much about their personal lives so that their works alone could be appreciated and understood. However, in the current age of social media, we can speak directly to our fans all around the world. I believe that we should use this technology and opportunity.

I am often asked by the media and the fans, “What the hell is going on in your head?” So, I wanted to share a little insight on a creator’s typical brain structure, thought processes, and electrical currents of the synapses.

In this program, I would like to share not only the process, ideas, methods, and techniques of creation, but also the various “stimulations” I’ve encountered that have led me here. By “stimulation” I mean something that is born from meeting people, movies, books, music, art, and other things in our daily lives. These “stimulations” may be a bit different from what other people have encountered, or they may be something that you are unaware of.

What made you want to create this podcast?

Way back in 2005, I did my own podcast, Hidechan! Radio, for a long time. I grew up in the generation of radio and after I became a creator, I wanted to give something back to the medium that was there for me when I was a lonely kid. As technology evolved, audio became video, and we created “HideoTube” after starting my independent studio.

However, we became busy with production and eventually stopped streaming. Then the pandemic happened, and I remembered the importance of connection with other people.

After that, we started up an experimental radio program for one season. The response from Japan was great, but we also received a lot of comments from overseas fans on social media saying, “I can’t listen to it in my country!” and “I can’t understand it in Japanese!” I couldn’t just ignore these voices! So, I decided to make a podcast show with English dubbing to stream worldwide. Spotify agreed to this reckless endeavor. I’m not sure if this way of communication with the fans across the world will work, but I’m really excited about this new challenge.

People have so many different ways to problem solve and think creatively. What would you say is the most unique part of your creative process?

Planning, ideas, world settings, character settings, plot, story, scripts, gimmicks, game design, events, directions, sound design—and so on and so forth—all of which I create simultaneously as I work my way to the finish line. I suppose that is what makes me different from the others.

And every day, I continue brushing up the details until the last minute, when we submit the master. I think this is one of our unique ways of working on our projects, and it’s the strength of “A HIDEO KOJIMA GAME.”

Whether you’re creating a movie or creating a game, it involves having a massive team on a project, so the work is usually split up. Also, once the process starts, you can’t turn back, almost like a river flowing downstream. In my case, since I stop and check every day, it is possible to go back and correct things without wasting time. Even if a character has already been completely set up, designed, and modeled, I can easily modify and add in newly adjusted settings or designs and even change the role of the character in order to tweak some dialogue in a certain scene to make it more effective. This method may be similar to how Pixar operates, revising scene by scene until the very end.

What type of things will Geoff Keighley, the driving force behind The Game Awards and Summer Game Fest, talk about as a regular contributor on Brain Structure?

Geoff is based on the West Coast in the U.S., but he travels all over the world and has a global presence. He has deep connections not only in the game industry, but in the movie and music industry, too. He is deeply involved with people not only on the business side of things, but also with the creators themselves. So, he will be reporting on the latest and most up-to-date news, including ongoing trends, movements, issues, and opinions that are happening in the industry right now. His report will be very valuable to the show.

It’s become clear over the years that your love of movies has greatly influenced the way you make video games and helped you develop a unique approach. When did you first realize that the creative elements of filmmaking could be applied to video games?

First, I may need to clear up some misunderstandings. My creative process is not only influenced by films, but also by books, music, art, education, and every experience in my life that I have absorbed and digested.

I started creating games in 1986. At the time, game consoles had extremely limited capabilities. There were pixel and color limitations and also no music or voices, just beeps for sounds. Animation was also very simple. Characters had no faces, expressions, voices, personalities, or even backstories. However, even in this situation, screen layout and storytelling were possible to some extent. So, in a way, it was possible to use directional techniques that I had learned from movies and novels. This is because storytelling is a primitive human activity.

After that, technology evolved, and the number of colors that could be displayed increased, the resolution became higher, and the medium became CDs, so sound, music, and video (still compressed images at the time) could be played. This was before real-time 3D. It was around this time that film and stage techniques, including sound effects, could be used effectively.

Next came 3D polygons and the ability to make use of the camerawork. This was revolutionary. Then, more improvements to the graphics and frame rates brought to life the subtle movements and performances of actors, and the important concept of lighting, which is critical in movies, was carried over to games.

To be honest, back in 1986, I had no idea that games would evolve so rapidly, but I believed that games would one day be a comprehensive art form that would surpass movies. Art is something that transcends time and place to convey something to people. It has existed with us human beings since the time when murals were painted on the walls of a cave. Creation is a reflection of the progress of mankind itself; it is a reflection of the experiences in our lives. It is with this conviction and belief that I jumped into the game industry and continue to create today.

Ready to dive into the mind of a creative mastermind? Press play below and start streaming the first episode of Hideo Kojima Presents Brain Structure.