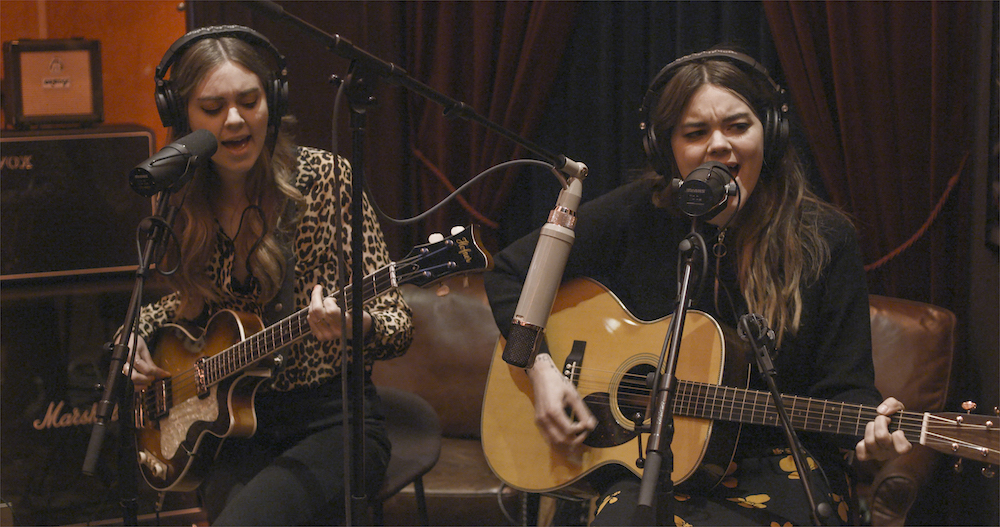 Klara and Johanna Söderberg, the guitar-toting sisters behind Swedish indie-folk band First Aid Kit, are no strangers to a good cover song. In fact, the 27- and 25-year-old duo encountered internet fame due to their chilling acoustic rendition of Fleet Foxes’ “Tiger Mountain Peasant Song.” Now, as established performers in their own right, the sisters bring their unique style to every note and lyric—and record covers that impress even the original band that wrote them.

As they’ve grown in popularity—the two have garnered over 2 million monthly listeners on Spotify—they try to perform at least one cover at every live show to pay tribute to their influences and challenge themselves by playing something new.

Recently, the sisters had the opportunity to record one of their hit songs, as well as a new cover, at the new state-of-the-art Spotify Studio in Stockholm. We sat down with the Söderberg sisters to cover everything—their reason for recording Kate Bush’s ethereal 80’s pop-synth classic “Running Up That Hill,” a common misconception about folk music, and the way magic has emerged in their lives and in their music.

Q: What was it like to record in the new Stockholm Spotify Studio? What was unique about the opportunity?

A: We had a blast! The studio is beautiful. It truly has everything you need recording-wise. We felt very spoiled to get to go in there and play around, do whatever we wanted in such a luxurious environment. It was very freeing. We are super happy with the results; we think the performances really came through and that the sound is fab.

When we recorded the Spotify Singles we only had a couple of hours, which makes for a really special energy in the room. It’s a little scary, because you know you’re not coming back to change anything, but there is also something exciting about that.

Q: Tell us about the new version of your song “Fireworks”—what distinguishes it from the album version, and why did you want to make a new recording like that?

A: We wanted to release a stripped-down version of “Fireworks” to parallel the more lavish arrangement on the record. We think the song works really well this way, and the song melody and the lyrics really come through. We wrote the song this way, and it reminds us of the original demo we made for the song in our home studio in Stockholm where Klara is on acoustic guitar, Johanna is on bass guitar, and our father Benkt is on electric. We also got help from our dear friend and touring companion Sebastian Ring. He wrote the beautiful string arrangement you can hear in the background. It was played by a Stockholm-based string quartet.

Q: What did you cover for your Spotify Single, and why?

A: We wanted to cover an artist we hadn’t covered before. Kate Bush is new territory for us and was a fairly recent discovery. She’s so powerful in her expressions, so unique in her lyrics and performances. She’s got something magical going on.

To us the song is about gender, about how we’re taught to see things differently depending on if we’re born a man or a woman. How it can be really difficult to understand each other, and how much easier things would be if we could switch sides for a while.

Q: What cover would you like to tackle that you haven’t attempted yet?

A: When it comes to covers we’re up for anything, and we’ve already covered all kinds of genres, from an electronic act, like Fever Ray’s “When I Grow Up,” to heavy metal, like Black Sabbath’s “War Pigs.” We’d love to try a Fleetwood Mac or Stevie Nicks song. We’ve attempted them before, but because the originals are so good, it’s tricky. It’s a thin line between sounding like a bad karaoke version and attempting something new with a song. One day we’ll get there though.

Q: What’s the biggest misconception about folk music you’d like to dispel?

A: That it has to be soft and polite! Folk music should be played loud and be performed with lots of emotion and conviction. It’s OK to be angry in a folk song.

Q: When you were young, you both thought you could be witches. Did that influence your music video for “My Silver Lining,” or your choice to cover “Running Up That Hill?” How is music like magic?

A: Yes, haha, that is true. Many of our songs have a dark and mysterious vibe to them. We’ve always been drawn to witchy imagery in our videos and artwork. Maybe it comes from spending hours watching “Charmed,” “Sabrina The Teenage Witch” and “Buffy The Vampire Slayer” as kids. Or maybe we truly are witches.

Music is definitely magic! We don’t quite understand it and we don’t try to. Writing and performing songs is almost a spiritual experience. The way we connect when we sing together sometimes feels otherworldly.