Last year, seven million people in the US produced podcasts—and even more people consumed them. But the process of recording, editing, transcribing, and adding sound effects isn’t always easy. That’s why Soundtrap, a Spotify company, was inspired to create Soundtrap for Storytellers, a cloud-based one-stop shop for podcast creation that helps podcasters share their stories in a powerful and efficient way.

Soundtrap for Storytellers is a comprehensive podcast creation tool that offers recording, remote multi-track interviewing with video chat, smart editing of audio as a text document, full audio production, direct-to-Spotify publishing of the podcast, and transcript publishing to optimize SEO all in one service. 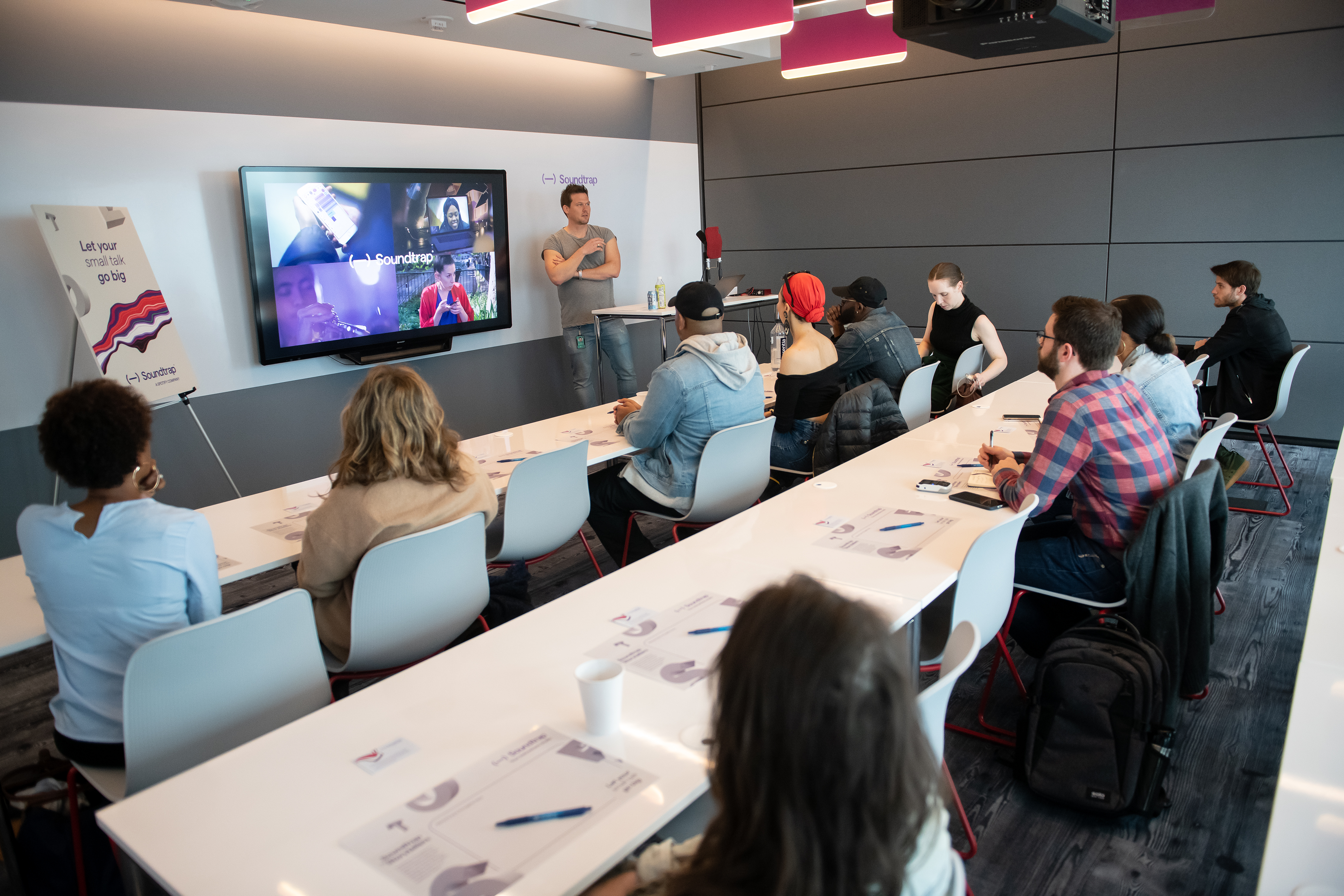 Soundtrap demo at the Spotify office

Favorite part of podcasting: “The freedom of speech. My podcast creates an opportunity for an extremely intimate experience between two people with no boundaries that I get to then share with the world.”

Why Soundtrap excites Hannah: “I think a lot of podcasters don’t have any knowledge about the importance of SEO, or getting found in unique ways, besides just promoting on our social media. So having a transcript of what you’re saying that also helps with SEO is incredible.”

Favorite part of podcasting: “I love getting to know someone. You can get away with asking a few questions when you first meet someone, but you can’t just sit there and grill them for an hour. As a curious person, it gives me an excuse to be able to literally do that.”

Why Soundtrap excites Lindsey: “The fact that you can record with someone when they’re not physically with you is huge. I’m not able to do that right now because the sound quality is just not the same with other programs or over the phone. But Soundtrap allows two computers to have the same recording situation set up. That’s huge for podcasting.”

Favorite part of podcasting: “Connecting with the guests and interviewing. Honestly, when I’m in the moment interviewing, I’m just in it. So when I actually hear the final product, I’m like, ‘Wow. That was a good episode.’”

Why Soundtrap excites Jamila: “Right now, I record the interview on my computer. Then I’ve got to download the track, then upload it so my editor can take it. Soundtrap eliminates the steps and makes it easier for me just to record.” 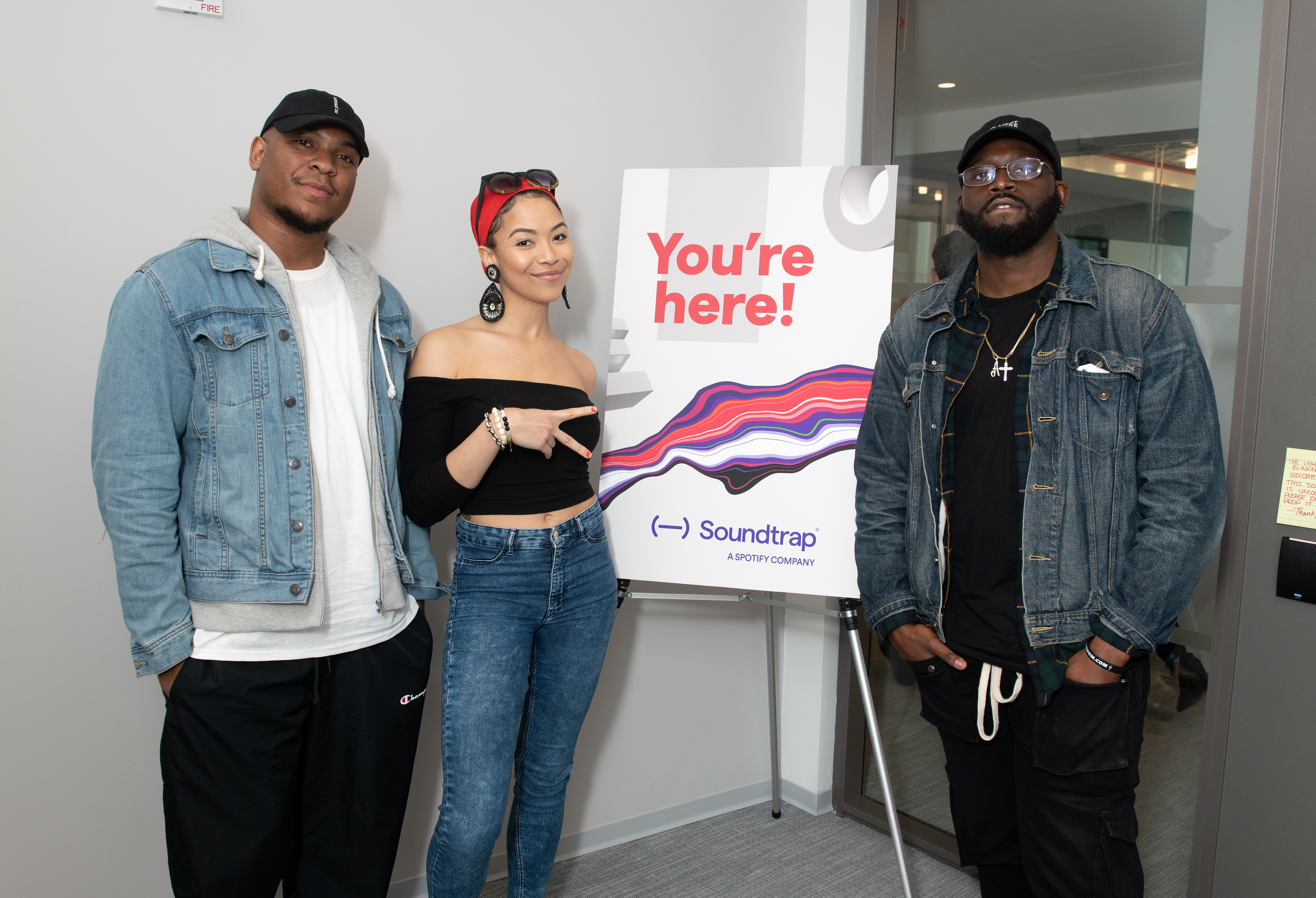 The crew of The Need to Know Podcast

Savon’s favorite part of podcasting: “I got into podcasting not just because it was innovative, but also because it was very personable. A lot of media is not personable, you know? So listening to somebody and feeling like you’re connected with them was the main draw for me. Also, just doing it with smart people whom you learn from.”

Why Soundtrap excites Steph: “Schedule-wise, we’re all super busy. Sometimes one of us might not be able to make it, or be physically there. So the fact that we can still record is very important. Listeners look for our content every week. And they will hunt us down.”

Rayna’s favorite part of podcasting: “We love conceptualizing the episodes, we love polling our audience for what they’re really looking for, and we try to pull in all of their advice. We love all the emails we get asking for certain topics, and we love trying to figure out who the next guest will be that’s so great for that, and how we can create a show around them that’s really interesting and different.”

Why Soundtrap excites Ashley: “I like that it normalizes the levels as it’s recording, and then again after. Because right now, it records all onto one track. So if someone was just way too quiet or too loud, I can go in there and do it manually, but it would take forever. So I have to use an external program. I like that Soundtrap is pretty much doing that for you.”

Try Soundtrap for Storytellers, available today online and on iOS and Android, with pricing starting at $14.99/month and an annual plan starting at $11.99/month. Or if you’re more of a listener, check out the rest of the podcasts on Spotify.