Over the past few years, our team at Spotify has unveiled several listening experiences that take you beyond the standard formats of playlists and podcasts. Your Daily Drive and The Get Up, for example, incorporate both music and the spoken word in dynamic settings, tailored to your day. But to truly unlock an ecosystem of new ways of listening, we knew we needed to enable the creation of new audio formats. So when we began testing Music+Talk shows last fall, we rolled out the listening experience alongside the ability to create this content—giving everyone the ability to curate music tracks directly into their storytelling.

Platforms like Anchor and Spotify for Podcasters have enabled access to easier creation of podcasts. (In fact, Anchor accounted for 80% of the new shows on Spotify in 2020—that’s more than 1 million new shows.) And to truly build the future of audio, we want to give everyone the ability to take their creativity further, even beyond the existing concept of a podcast: to make audio experiences that have never before been possible. We think of these possibilities as the “future formats” of audio—and we believe that the best way to build an ecosystem of audio content is to enable its creation, by everyone.

We began this journey with the rollout of Music+Talk shows and their corresponding creation tools in Anchor. But that was only the beginning. Today at Stream On, we shared several new and upcoming capabilities to enable the creation of future formats of audio. Read on to learn more.

Today, we announced a new partnership between Anchor and WordPress to power opportunities for content creators to evolve their work and reach new audiences through the power of audio. With this new tool, available now, bloggers can publish their written content as a podcast with just a few clicks—and podcasters can create a website for their podcast just as easily. This offers a whole new group of creators—those who have historically focused on the written word—to access an entirely new audience via audio and share their voices on Spotify. Check out Anchor’s and WordPress’s blogs to learn more. 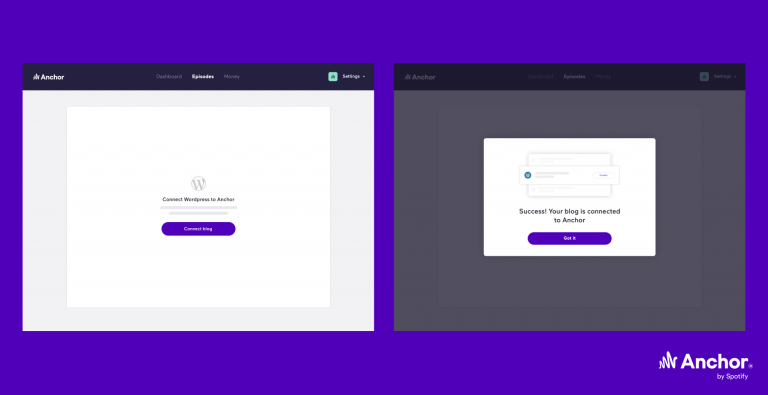 Historically, podcasting has been a one-way street—from creator to listeners—with little opportunity for direct feedback. But with Spotify and Anchor, the creation and listening technology is brought together in the same ecosystem, allowing for a back-and-forth. This has enabled us to build interactivity features like Polls and Q&A, which we’ve been testing in partnership with a small beta group of creators. We will be widening that group to more users in the coming months, and creators can sign up here to express interest in participating in future tests of interactivity features. 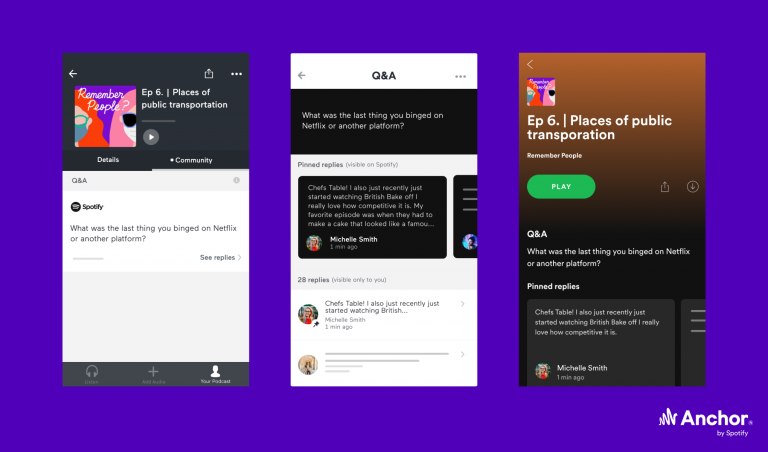 In the coming months, we’ll begin testing the ability for creators to add video to their podcasts when they publish via Anchor—meaning these creators will have the power to complement their audio with visual. We first began testing video podcasts on Spotify in July of last year and have since been iterating on the offering. Later this year, more creators can expect to access this feature as we expand the test via tooling that will live in Anchor.

New models for monetizing your work on Spotify

Going forward, we’ll also begin testing a capability for podcasters to explore new revenue streams through paid subscriptions supported by their listeners. Recently, some podcasters have started earning revenue by offering bonus content exclusively for paid subscribers—and soon they’ll be able to do the same on Spotify, where their content can easily be discovered by fans around the world. Creators can sign up here to learn more and express interest in this feature.

We’re excited about what’s to come, and to see creators take advantage of these new tools as they’re released over the coming months. Ready to experiment with your own future format now? Try out Music+Talk, a show format that allows creators to incorporate songs from Spotify’s music catalog directly into their storytelling. Find novel Music+Talk shows—including Maggie Rogers’ Notes from the Archive, Maluma’s Una Semana en Jamaica, and Hulu’s The Ultimate Playlist of Noise—in the Music + Talk hub on Spotify, and make your own show on Anchor.