Esther Robertson wasn’t born an “Esther.” In fact, the Scottish woman had three different names before she was three years old. This is just one of the unusual circumstances surrounding Esther’s adoption—and readoption—in the 1960s. Now, in a new Spotify Original podcast, Looking for Esther, she’s ready to discover the truth about her past.

The idea for the series was born out of Spotify’s 2019 Sound Up program, in which Esther was a participant. During the intensive, weeklong U.K. program, Spotify provides education, mentorship, and support to train the next generation of underrepresented voices in podcasting. Esther used this time to polish the idea for her podcast, learn from other successful podcasters, and even acquire hands-on experience with the equipment that would help bring her voice to life.

Over the last two years, Esther and Gayle Anderson, the series writer, executive producer, and Esther’s partner, have been on a search for the answers that make up Esther’s past. What they found is detailed in the eight-episode series. “What a journey it’s been working with Esther Robertson on bringing her remarkable story to life,” shared Natalie Tulloch, Sound Up Global Lead. “Our longstanding Sound Up program is all about supporting underrepresented voices in podcasting—whether in front of or behind the mic. We are so excited that the world finally gets to listen to her remarkable story.”

For the Record had the opportunity to chat with Esther about her personal journey and the challenges she faced along the way.

What prompted you to embark on this journey to discover more about your past?

A cancer diagnosis in 2018. I was told that I had stage four ovarian cancer. It was a huge shock and it gave me time to reflect on my life. I found I had a few regrets and one of my biggest regrets was not finding my birth mother. I’d made a few attempts to trace her over the years, but every time I tried, it opened up another can of worms. I suppose I was too afraid to follow it through. But this time it was different. The way I see it is, if you can face up to cancer, you can face up to pretty much anything. I’m currently in remission, by the way, and loving life.

Considering how much time had elapsed since your adoption, what challenges did you face as you searched for answers?

I had a bag full of old social work notes that I’d been given when I was in my early twenties and pretty much nothing else. I didn’t even have any pictures of me as a baby and I still don’t. Gayle and I had to basically become private investigators to try to piece the jigsaw together. This was made even more challenging as a lot of it was done during COVID restrictions. We contacted the social work department, the Church of Scotland, the Moving Image Archive of the National Library of Scotland, and hundreds of other people and organisations. I reconnected, too, with my siblings, the Robertsons, and also my Uncle Eddie Lindenberg. They were all really helpful and were able to shed light on a lot of things—but not by any means everything. 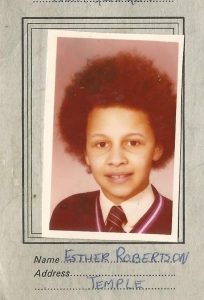 What made you want to document your story in a podcast format?

Because I feel that it’s a very powerful medium and this is a very powerful story. The immediacy of it would allow listeners to join me on my journey, share my happiness and my disappointments along the way. They’d get a sense of the urgency of this real-time search for my mum. I’m a huge podcast fan and listen to hundreds of them. I was working on an outline for a podcast series for my story when I happened to read a tweet about Sound Up U.K. in 2019. The rest, as they say, is history!

The series writer and executive producer is your partner, Gayle Anderson. What was it like working on this project with someone you’re so close with?

I’m not going to lie, we both found it extremely challenging at times. We’ve been together over 13 years. Getting through the cancer diagnosis and treatment had made our relationship stronger, but we did need to draw on those reserves to get us through making the podcast series. To keep it real and demonstrate just how much stress we were under, we even use a phone conversation of one of our rows in an episode. I’d accidentally recorded and we just decided to put it in. We’re totally fine now, of course, and we have zero regrets about doing it. We’re both very, very proud of what we’ve managed to produce.

What advice do you have for anyone else who’s been in a similar situation and feels they either don’t belong or have unknowns about their past?

My advice would be, don’t be afraid to face up to the truth. It’s better to know than not to know. A sense of identity is vital. Without it, life can feel so rootless, so transient. Be yourself and speak your truth. And remember, it’s never too late to begin your journey.

If you could rewrite the adoption or foster care systems, what are some of the changes you would make to help kids today have easier access to their histories?

Huge changes have already been made. We talk to social workers in the podcast to find out if what happened to me in Scotland in the early 1960s could happen now, and we’re pleased to report that it definitely couldn’t. There’s a whole system of checks and balances to ensure that everyone understands the child’s circumstances and identifies the right solution for them. If that’s adoption then that’s absolutely great, but prospective adopters now require a real understanding of the impact adoption might have on a child. The preparation prospective adopters go through is really thorough. These days, many adopted children also receive “later life letters.” These are written by social workers to a child who’s being adopted to help the child make sense of their past. But they’re kept and read later in the child’s life when they’re old enough to process it all. What a wonderful idea! 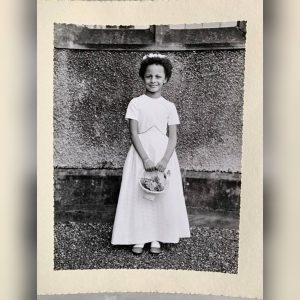 Can you tell us about your experience with the Sound Up program? What part of it did you find the most valuable?

It was a week of intense podcast boot camp—but I loved it. My cohort was full of creative, talented, and super supportive women. There was a real feeling of camaraderie. Hearing their personal stories and listening to their pitches was incredibly inspiring.

Learning to pitch was invaluable. Things like, how to get your idea across clearly and concisely, how to make it stand out, and how to make it memorable. We received lots of advice on this from established podcasters such as Tolly T from The Receipts and Chantelle Miller from the Island Girls Rock Podcast. How to use the Zoom H5 recording equipment that was supplied was incredibly important too—we recorded all of Looking For Esther on it. I left the week exhausted but with renewed confidence and determination to make Looking For Esther happen.

Now that you’ve wrapped this podcast, what are you looking forward to working on next?

First of all, this has been super emotional so I’m planning a looooooong break. Gayle and I are off to Turkey for six whole weeks in early June. We can’t wait. I’m hoping that my next project could be to trace my birth father. All I know is that he was an African American Air Force man called Bob Hubbard who was based in Scotland in 1960-1961. I do a shout-out for information on the podcast and I’m hoping it leads somewhere. I still very much need to find out about my paternal heritage.

Join Esther on her journey by streaming the first episode of her podcast below: