A country’s history is often told through its arts and culture—and especially its music. The story of South Africa is no different. Twenty-eight years ago, apartheid ended and all South Africans became able to vote in the country’s first nonracial national elections, a day that is now celebrated in the country as Freedom Day. And from that first Freedom Day to this year’s, music has remained an enduring marker of struggle, unity, and perseverance for South Africans.

The end of apartheid collided head-on with the rise of Kwaito, a genre known for catchy melodic and percussive loop samples, deep bass lines, and distinctive vocals. Its name comes from the Afrikaans word kwaai (meaning “angry”), and it was spearheaded by the likes of Oscar “Oskido” Mdlongwa, who took inspiration from international house music beats, slowing them down and infusing them with local genres and township slang. By the early 2000s, Kwaito was undeniably entrenched as the sound of South Africa’s streets, with hits like Mandoza’s “Nkalakatha” crossing racial lines.

According to Spotify data from the last three months, the sounds of Kwaito continue to resound both locally and internationally. Over the past 90 days, the genre was streamed as far and wide as the U.K., the U.S., Germany, and Australia, with music lovers between the ages of 18 and 44 all listening to the genre in equal measure. 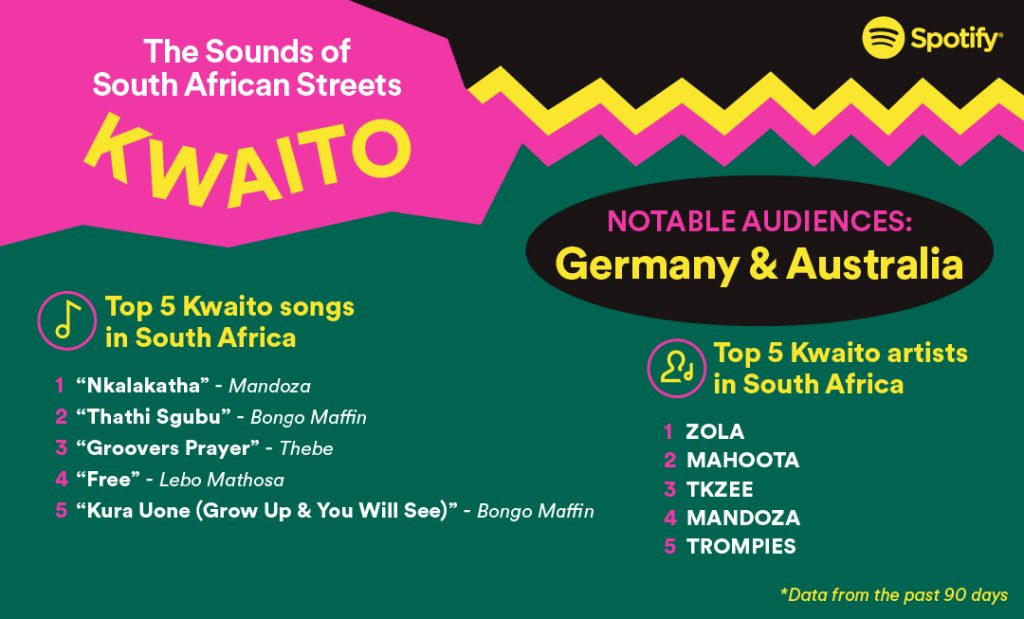 Just as Kwaito emerged in tandem with the fall of apartheid, a new sound of South Africa’s streets debuted commercially right before the 2020 pandemic: Amapiano. But it’s not only the favorite of South Africans—our data points to music lovers around the world streaming the genre en masse.

Over the past 90 days, South Africa–based music lovers led Amapiano listens and generated a whopping 149 million streams of tracks in the genre on Spotify. Combined listeners in the U.K., U.S., Canada, the Netherlands, and France generated streams reaching 42 million while streams generated in Nigeria, Botswana, Kenya, and Namibia came up to 16 million. In total, the top 10 countries streaming Amapiano over the past three months produced a total of 207 million streams. 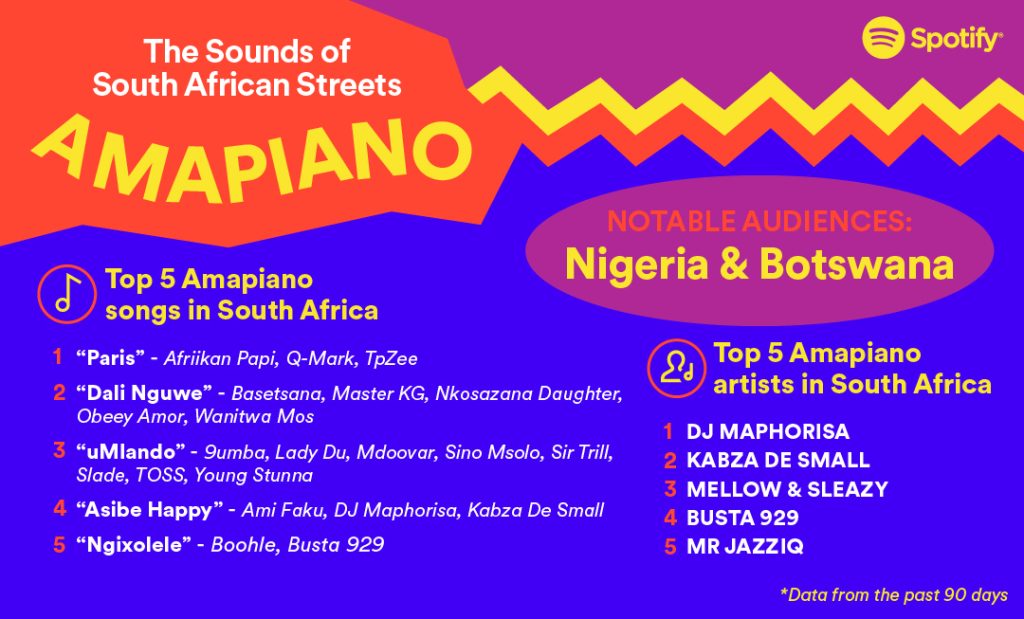 Unlike the postapartheid genre Kwaito, the content of Amapiano tends to be more aspirational. The top-performing Amapiano song on Spotify in the last 90 days—“Paris” by Afriikan Papi, Q-Mark, and TpZee—is a love song in which the singer of the hook promises to take the love of his life to Paris the day they get married—something likely unattainable for many at the time of apartheid’s fall and Kwaito’s emergence. In the same breath, “Adiwele” by Young Stunna, which features DJ Maphorisa and Kabza De Small (the top two Amapiano artists over the past 90 days), is an inspirational anthem about breaking through and making it in life.

Genres that emerged in the time between Kwaito and Amapiano, though, such as House/Dance and Gqom have also received recognition to varying degrees inside and outside of South Africa. Gqom is a genre of electronic dance music developed from Kwaito that surfaced in the early 2010s in Durban.

And while the rise of Amapiano might lead one to believe that these genres are out of vogue, Spotify data points to the fact that the impact of these genres still reverberates among the age band of 18–29. Two-thirds of Gqom streams and 64% of House/Dance streams over the past 90 days can be attributed to this age group within South Africa thanks to House/Dance artists like Black Coffee, MasterKG, Sun-El Musician, and Zakes Bantwini. 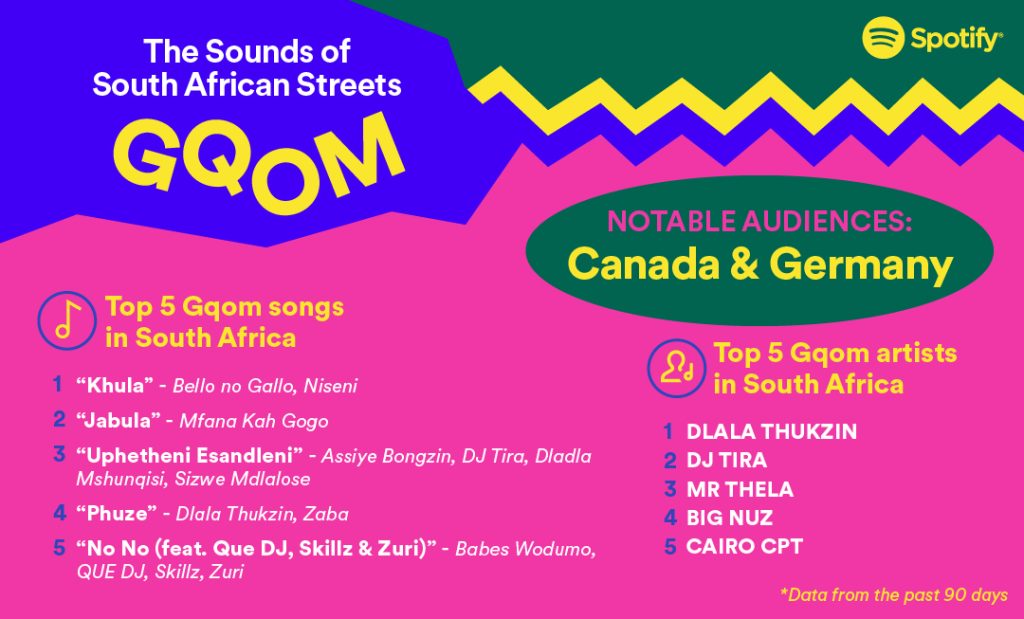 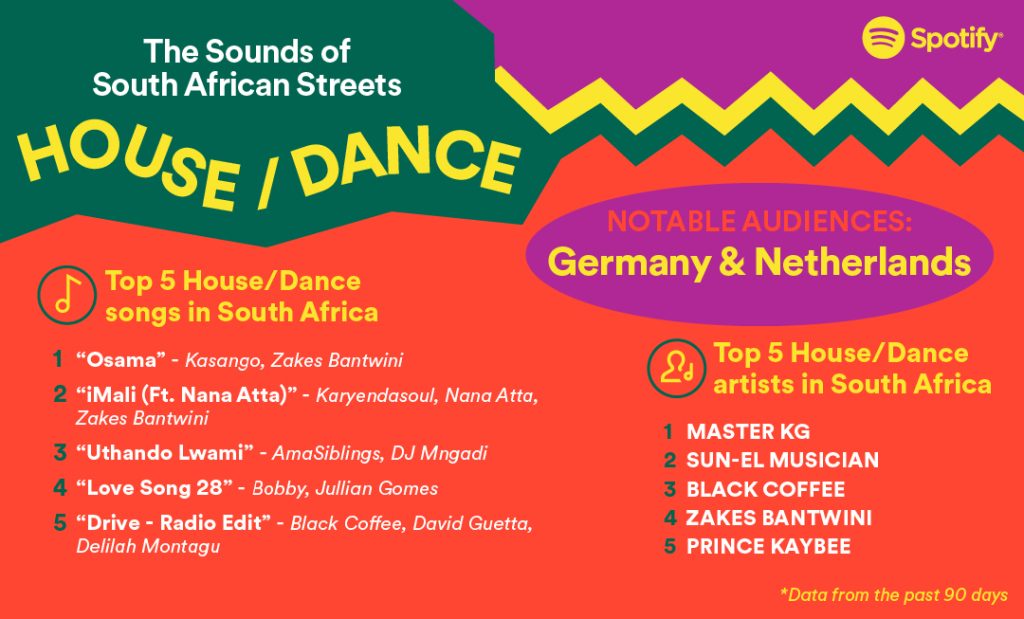 In the 28 years that have gone by since South Africa celebrated its first Freedom Day, much of life in the country has changed, but the stories surrounding South Africans’ lives continue to unfold. And the soundtracks to the nation’s vibrant streets will continue to serve as musical witnesses, both in the country and beyond.

Celebrate South Africa’s Freedom Day with the “Sounds of Freedom” from across these pivotal genres.

‘Jerusalema,’ the Limpopo House Track That Got the World Dancing