When Jason King was a kid, his family had a compilation full of disco hits from K-tel records in their music collection. On that tape was the song “You Make Me Feel (Mighty Real)” from the singer Sylvester. Jason—who is a musician, a nationally recognized journalist, and the Chair of NYU’s Clive Davis Institute of Recorded Music—didn’t know much about Sylvester at the time. In fact, he wasn’t even sure if Sylvester’s signature falsetto belonged to a man or a woman. But he knew it was his favorite song on the tape. 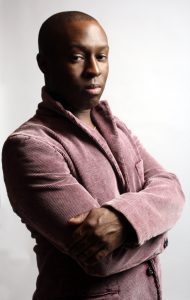 As an adult, Jason’s love of this song led him to learn more about Sylvester, an openly gay Black man living in 1970s America who dressed in drag and challenged gender conventions with a fervor few other musicians possessed. Though he wasn’t a household name, Sylvester’s innovative sound and persona paved the way for countless artists—particularly LGBTQ+ artists—to express themselves freely. And this is a big reason why Jason’s appreciation for Sylvester has made its way into his journalistic and academic work.

This has set the stage for the launch of Sound Barrier, our new documentary podcast hosted by Jason that aims to explore artists who have made pioneering contributions to music and culture. Fittingly, he has turned his focus to Sylvester for season one—exploring not only the singer’s life, but also the influence Sylvester has continued to have on BIPOC and LGBTQ+ artists after his death.

In celebration of Black Music Month and Pride Month, For the Record caught up with Jason to talk about his journey creating Sound Barrier, Sylvester’s one-of-a-kind music career, and why Sylvester is more relevant today than ever before.

The description for Sound Barrier labels Sylvester as “a musician who is perhaps even more relevant today than in the ’70s and ’80s.” In your eyes, what makes him so relevant right now?

He was just unapologetically himself despite incredible pressure from his record label to be more straight and more normative. Every time he met that pressure, he pushed back and he became more himself. And so I think he’s instructive to contemporary generations of how to be yourself at all costs.

Are there any particular eras or aspects of Sylvester’s life that you’ve focused on over the course of the season?

It covers him chronologically in every aspect, but one thing we take a close look at is his musicianship. I feel like Sylvester is often celebrated for being a cultural icon, which he was, and for being a pioneer around issues of identity. But he did it through the lens of music, and he was a phenomenal musician.

I really wanted to talk about the way his career evolved over the years and to push back against the narrative that Sylvester’s best work was in the ’70s and everything that came after that was an afterthought. I think his ’80s work is some of his most creative work, particularly given that he had an AIDS diagnosis in the late ’80s and was still continuing to make really important music.

Sound Barrier features many notable LGBTQ+ artists who span multiple generations. How did you decide on these featured guests?

Well, we knew that we wanted to have scholars who really studied and thought about Sylvester’s life. So that includes Joshua Gamson, who wrote the biography of Sylvester, The Fabulous Sylvester.

We knew that we wanted to have his collaborators, his friends, and people who knew him at that time who could testify about who he was: singers like Jeanie Tracy and Martha Wash, as well as Patrick Cowley, who was an innovator with synthesizers. And then we knew that we wanted to also have the younger artists who may not have known Sylvester, who may not be vested connoisseurs necessarily, but who have been touched in some way by Sylvester’s music or his spirit.

So I reached out to people whom I felt were in Sylvester’s musical genealogy. That included Alex Newell, famous for their work on Broadway and Glee; that included Billy Porter, who I think is very outspoken about how much of a role Sylvester played in Billy’s own self-acceptance—before and after he won his Tony award for Kinky Boots; that included the vocalist and rapper Mykki Blanco, who’s maybe not directly in Sylvester’s vocal tradition but is very much influenced by Sylvester in other ways.

In reporting out season one of Sound Barrier, the team managed to unearth some never-before-heard demos and interviews from Sylvester. How were you able to discover these, and what do they reveal about him?

I thought I knew a lot about Sylvester, but I learned a lot through this series about what made him tick, his musical choices, his aesthetic, and the pressures that he faced.

And having heard Sylvester’s unreleased early 1970s demos before, I felt like one of the things I could bring to this series was to connect our team to Universal Music Group executive Harry Weinger, who has been in possession of these unheard recordings. They were produced by Rolling Stone founder Jann Wenner, and they’re fascinating because they capture Sylvester as a work in progress who was really figuring out who he was and how to be his most authentic self. And he did that in these first recordings.

In one of the demos, he’s singing “Superstar,” which is a song that’s incredibly famous because it’s a Leon Russell song that was performed by the Carpenters and later by Luther Vandross. Sylvester is doing maybe the first cover of it, but it’s astounding because he’s taking these baby steps to figure out how to deploy that incredible falsetto of his.

There are now so many queer artists with non-queer fan bases, and vice versa. Do you think Sylvester would be surprised by that if he were still here?

I think he would have thought that was the most normal thing possible. But he was lucky enough to come of age at a moment when there were new possibilities for out gay artists to actually achieve success on their own terms. He was someone who benefited from that change in the culture, but he also ushered in the rise of a kind of androgyny in ’70s and ’80s pop music.

There’s something in the podcast that I call the “Sylvester Effect.” When you look at the rise of artists in the ’80s like Dead Or Alive’s Pete Burns, who was definitely gender-bending, or Boy George, or somebody like Bronski Beat’s Jimmy Somerville, who had that huge hit “Smalltown Boy” about coming out and being gay, I don’t think any of that would have been possible without Sylvester.

I think he helped open up this space for people to just be themselves. But also, for greater acceptance of LGBTQIA+, artists in the ’80s who would have all kinds of fan bases. And today we have someone like Frank Ocean, who has an incredibly diverse fan base. That’s really a result of the kind of freedoms that Sylvester helped push for.

Learn more about the life and influence of Sylvester with season one of Sound Barrier.

Pride Month Kicks Off on Spotify With Custom Podcasts, Playlists, Passion, and Purpose