This year, South Korea’s legendary band JAURIM, which led the popularization of band music in the nation and helped pioneer a new genre there, is celebrating the 25th anniversary of its official debut.

And to commemorate the impact of this iconic band, Spotify has invited the group to be the first contributor in our newest series, Kurated by [     ]. These playlists will be curated by K-culture’s finest creators and masters themselves to share their own stories and present their musical inspirations and tastes.

JAURIM is a natural choice for inaugural curator. After two and a half decades on the scene, JAURIM holds the title of the country’s longest existing and performing coed band. Today the iconic group continues to use its unique, authentic sound to tell stories as profound and mysterious as the band’s name—which translates to “purple rainforest” in English.

Consisting of three members (vocalist Yuna Kim, guitarist Sun-Kyu Lee, and bassist JinMan Kim), JAURIM has established its own genre and solidified a distinctive position in the South Korean music scene. Because of its uniquely wide spectrum of music and performance, the band serves as an inspiration to various fellow artists and creators both locally and globally. Most recently, BTS member and leader RM showed his love and respect for JAURIM, visiting the band’s celebratory “Happy 25th JAURIM” concert held in early July in Seoul. 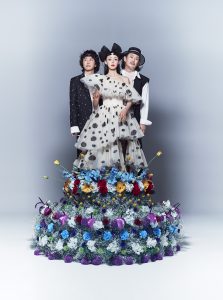 The band debuted in 1997 with the song “Hey, Hey, Hey” and has since made numerous hits that touch upon youth, people, and social issues. Some of its popular songs include “Beeswax Angel,” “I’m my fan,” and “Song of Ha Ha Ha,” with special track titles “Boxing Helena,” “Fanya,” and “Song of Ha ha ha,” respectively—named so by the band to celebrate its 25th anniversary. Not to forget “Magic Carpet Ride” and “Twenty-Five, Twenty-One,” the original soundtrack of the K-drama series with the same title. The band dives deep into dark human emotions like angst and reflects on societal illnesses, but it also calls out for hope and love that speak across time and generations.

JAURIM continues to connect with listeners worldwide through a variety of Spotify editorial playlists. Most recently, JAURIM’s “Twenty-Five, Twenty-One,” released in 2013 and currently featured in Spotify’s official partnership playlist of the K-drama, captured the hearts of many K-content fans and listeners around the globe thanks to the popularity of the K-drama.

Commemorating the band’s 25 years, Spotify and JAURIM put together the exclusive playlist Kurated by [ JAURIM ]—to help fans and listeners around the world connect and feel even closer to the band. The band members chose 15 of their own representative songs and selected 10 additional tracks from other artists who have inspired them, including Sinéad O’Connor’s “Why Don’t You Do Right,” Led Zeppelin’s “Good Times Bad Times,” Queen’s “Don’t Stop Me Now,” and Pearl Jam’s “Jeremy.”

Check out the full playlist below.

Spotify’s Kurated by [     ] series aims to connect more Spotify listeners worldwide with artists of various South Korean music genres and with masters who have led various sectors of the Korean cultural and entertainment industry.