In 2014, Hrishikesh “Hrishi” Hirway first combined music and podcasts with Song Exploder, a biweekly podcast that explores a popular song through an intimate discussion with the track’s creator. Artists ranging from The Postal Service to Dua Lipa have taken to the mic to explain their craft and process. In 2016, Hrishi started fiddling with another combination—turning the podcast into a TV show. He partnered with Morgan Neville, a film producer, director, and writer best known for some of his documentaries about musicians and songwriters, like 20 Feet From Stardom and Johnny Cash’s America. They embarked on the task of turning an audio show into a visual one, a project that would take two years—and plenty of hard questions.

This October, their hard work paid off when Song Exploder landed on Netflix. Each of the four episodes explores a singular track from creators Alicia Keys, Lin-Manuel Miranda, R.E.M., and Ty Dolla $ign in a new visual fashion that keeps the Song Exploder podcast at its core. 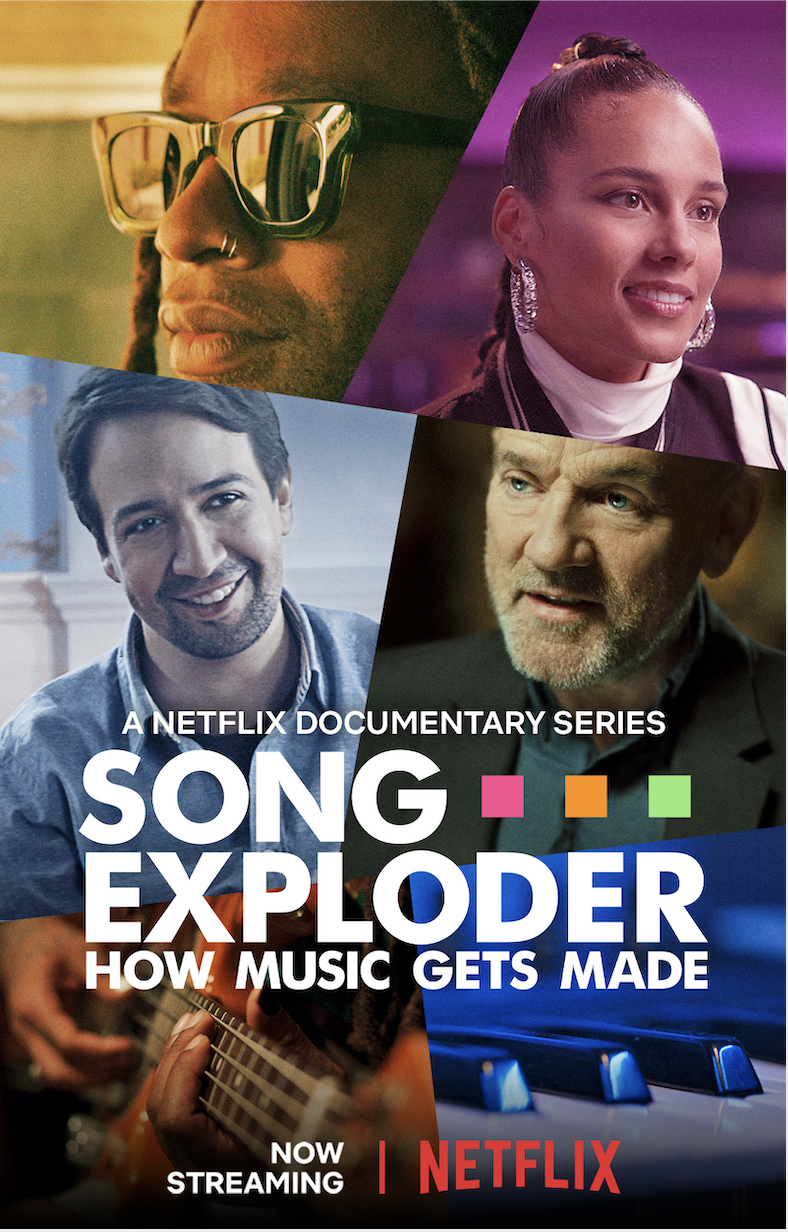 How did the two of you come to work together on this project?

Hrishi: I’d been approached by a few different production companies about the possibility of making Song Exploder into a visual series. And none of it really felt that right to me—but it was compelling enough to get me thinking about what it might look like and who I might want to work with. I had been a fan of Morgan’s for a long time and had a friend, Jason Zeldes, who had worked with him. I asked Jason if he would introduce us. Two days later, Morgan and I met for the first time in his office. We probably met for about an hour, but I think within the first 15 minutes we were like okay, let’s do this.

Morgan: I was a fan of the podcast. And as soon as we started talking about the idea of turning it into a TV show, I got excited about it. One of my favorite things is the creative process. I’ve made documentaries about artists and designers for a long time, and I find it endlessly interesting to see creative people who are really good at the craft practicing it. So I also liked the idea of telling a big story through a tiny keyhole, like a song. I thought that was really an interesting challenge. And we thought great, it’ll be easy, and of course it wasn’t.

What are some of the ways in which it was challenging?

Morgan: I think whenever you transfer something from one medium to another, it’s like solving an incredibly difficult puzzle. How does a podcast become a TV show without losing the intimacy and the attention to sound that the podcast had? We had months and months of conversations and tests to figure out what the show was going to be. Things that now maybe seem obvious were not obvious at all in the beginning, like “should Hrishi even be in the show?” I think we absolutely ended up making the right decisions, it just took us a long creative process to chew through all those questions.

The Song Exploder podcast looks at one song per artist per episode. The TV show does the same. Did you ever explore using a different format?

Morgan: The basic idea that it was going to be one artist and one song never really wavered, but the way we told that story changed. In the podcasts, typically it’s just the artist speaking. We wanted to have more voices, so the TV show episodes have cowriters and producers and other people come in to tell the story.

We also had to figure out how to get the same intimacy as the podcast, where you feel like it’s just the artists talking to you. I think the idea that Hrishi would be on camera and then we would be eavesdropping creates that sense of intimacy, as opposed to the artist just talking to somebody off-camera. It feels like we’re listening in on this really deep, great conversation that we normally wouldn’t be privy to. That was kind of the big breakthrough for us in terms of formatting the show.

Hrishi: One thing that we could do with the TV show—what Morgan was just talking about—is have everybody involved, because in a TV show you don’t have to worry about any kind of confusion with people who might have similar-sounding voices. For example, with the R.E.M. episode, you have four men speaking. In an audio format, people may have a harder time keeping track of which voice belongs to whom and what perspectives they have. You don’t have to worry about that here, because you’re also seeing the person speak. It was a little thing, but it definitely fundamentally changed what was possible.

Of the hundreds of artists you spoke to on the podcasts, how did you choose the four for the TV show?

Hrishi: For these four episodes, there was a similar mission to the podcast, which is to feature a wide range of artists and genres of music. Having a song from a musical, having a song from 25 years ago, having a song that’s brand new, those were all important considerations for us. We tried to get artists that not only had really compelling stories, but were big enough names that people who didn’t even necessarily know their story might be interested in listening.

This is a totally new arena of taking a podcast and making it into a TV show. Do you have any advice for other podcasters who may also be interested in exploring that format?

Morgan: I think the best way to honor something, when you’re telling it in a new way, is to take it apart and put it together without being too dedicated to what it was. The important thing is the DNA of the show. Podcasts just operate differently in our lives than TV shows do. So you need to reinvent it.

Hrishi: What’s most important is being able to recognize the most essential elements that can be translated, remixed, and presented in a new format while still feeling connected to the podcast. But it’s not just a matter of using those things. It requires the rest of the filmmaking team to get on board and understand what those things are. If you don’t agree, or if you can’t communicate that, or if you’re on different wavelengths, then it’s going to make an already difficult process maybe impossible. There’s nothing more important than finding a good partner to work with.

Stream the latest episode of Song Exploder below, or head to Netflix to watch the new TV show.

Composer Terence Blanchard Riffs on Music in Spike Lee Movies, from ‘Do the Right Thing’ to His Latest Joint, ‘Da 5 Bloods’

Join Dr. Ayana Elizabeth Johnson and Gimlet’s Alex Blumberg as They Discuss ‘How to Save a Planet’ in Their New Podcast