Some of the biggest cultural moments of the past five years point to an increasing recognition of athletes as being more than just the sports they play. Whether it’s tennis star Naomi Osaka choosing to opt out of interviews for her mental health or NBA legend Lebron James refusing to “shut up and dribble” when it comes to the deaths of Black people at the hands of police, conversations about social justice and sports are now par for the course. As part of Women’s History Month, we felt it was important to call attention to the battle for equality that women in the sports world fight every day.

Which is why two of our podcast editorial communities, the social justice–focused Play Your Part and the sports culture–focused The Roster, have teamed up to deliver The Fearless hub on Spotify. Centered around identity in sports as well as the economic realities behind the sports industry, the inaugural edition of The Fearless features a selection of podcast episodes curated by Play Your Part editor Ayo Oti and The Roster editor Deondric Royster, along with guest-curated playlists that offer a deeper insight into the equality struggles women face in sports.

“Whether sexism, racism, homophobia, or even a mix of those and other societal ills, women—trans women included—have gone about breaking barriers in spite of the ones put in their way. Our page is an opportunity to share their stories and the creators that amplify them,” Ayo and Deondric told For the Record in a joint statement. “We believe there is an opportunity to explore this intersection between social justice and sports, and we hope that listeners interested in either or both issues will engage with The Fearless.”

One of the guest curators for this edition of The Fearless is Dr. Amira Rose Davis, whose podcasts Burn It All Down and American Prodigies not only explore the intersection of gender, race, and equality in sports, but also the ways in which it parallels the world at large.

“​​I think one of the old adages is that sports reflect society, and people have pointed to that to say, well, the way that women are treated within the world of sports reflects a lot on how they are regarded by their state, by their government, by society as well,” Amira explained in an interview with For the Record. “I also push it a step further and like to think about sports as a laboratory. And so it’s not just that it’s reflecting society, but it also has a capacity to lead the way both in good and bad ways on many things.”

On Hear Us Now: Black Women in Sports, Amira’s playlist for The Fearless, she includes two episodes of her own from American Prodigies. These episodes share the stories of two Black gymnasts: Dianne Durham, who was left off the 1984 Olympic team despite winning the all-around at the 1983 World Championships, and Betty Okino, who was part of the USA team that took bronze in the 1992 Games. But looking beyond the challenges these athletes faced, Amira also considers how they worked to create a more sustainable space for Black gymnasts.

“A lot of what Betty details is echoed in other interviews we’ve conducted about the sport of gymnastics and other aesthetic sports like figure skating,” Amira revealed. “It is about body image ideas—about being voiceless. And with Betty, we have a conversation about how being a Black girl on top of being a woman made it harder to speak out.”

The path to payback

In addition to this intersection of gender and race in sports, another major point of emphasis for The Fearless is pay equity. While working on the hub, Ayo and Deondric were both inspired by the film LFG, which documents the U.S. Women’s National Team’s (USWNT’s) highly publicized legal battle for pay equity following their triumph at the 2019 World Cup. And it’s a big reason why Ayo and Deondric made a point to feature Alex Andrejev’s podcast, Longshot: Payback.

Like LFG, Longshot: Payback explores the social and economic issues revolving around the USWNT and women’s soccer at large. Along the way, Alex, a reporter who covers Major League Soccer’s (MLS) Charlotte FC for the Charlotte Observer, takes a closer look at one pro soccer player in particular: Jessica McDonald, who has become a prominent face in the USWNT’s pay equity battle. 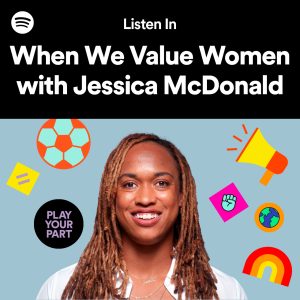 Jessica also contributed a playlist to The Fearless, which you can find on Spotify.

There’s a lot that’s inspirational about Jessica’s story, which includes overcoming a tumultuous childhood to win a national championship with the University of North Carolina and then recovering from a devastating knee injury early in her career to win the 2019 World Cup with the USWNT. But what stands out most is that the 34-year-old forward is one of the few single mothers currently playing in the NWSL, and prior to this year’s NWSL labor agreement, she had never had a season as a professional athlete where she made more than $42,000.

“It’s a little bit jaw-dropping to hear Jessica say, ‘Yeah, I was only making $15,000 in my first few years in the league.’ Like, here’s a World Cup winner saying this, and really, it was a mountain,” Alex reflected in an interview with For the Record. “It was after her time playing for the NWSL’s Houston Dash that she was working at an Amazon packing facility during an offseason and she was like, ‘I don’t want to do this to my son anymore. I feel like it’s time to kind of throw the towel in.’”

Alex hopes that Longshot: Payback can help bring more exposure to athletes with stories similar to Jessica’s and help put into perspective just how little they’re being paid relative to the sacrifices they make. But Alex’s other hope is that this will inspire women in sports to continue banding together and demanding fair compensations from the leagues, federations, and organizations they play for.

This is a sentiment shared by Amira, who has seen the same phenomenon play out in the WNBA with its players securing a historic labor agreement, and she believes that the next step in pay equity in sports is to consider the idea of “fair compensation” in a more holistic way.

“Why are there players who are six foot and change squeezing onto coach flights? What about child care? What provisions are there for parents, for pregnancy, for adoption, for multiple forms of family making?” Amira asked. “We’re obviously seeing there’s more of an emphasis on not needing to work multiple jobs just to afford life as a professional athlete. And I think one of the big things that we need to continue to see happen are these widespread collective bargaining agreements that include provisions about quality of life and not simply that paycheck number.”

Interested in learning more about the ways that gender inequality affects women in sports? Head over to The Fearless and start streaming one of the podcast episodes handpicked by our teams at Play Your Part and The Roster. And for more on the film LFG, be sure to check out the curated podcast picks from the editorial community over at Listen If You Watch.

Movie and Film Buff? Spotify’s ‘Listen If You Watch’ Page Has the Perfect Podcast for You

Women Bring Their Own Perspectives to Podcasts in Indonesia