One of the universal qualities of hip-hop is how artists use the genre to express where they come from and the needs, fears, frustrations, and successes they experience along the way. This has set the stage for Australia’s A.GIRL—real name Hinenuiterangi Tairua—a 22-year-old rapper who is putting western Sydney on the map.

Over the last two years, she has gained national recognition thanks to her raw style and distinct sing-rap mix that yields attention-grabbing moments of musical brilliance.

On the strength of tracks like “We Them Boyz” (featuring Jaecy)—her first to be featured on Spotify’s flagship A1 hip-hop playlist—A.GIRL has enjoyed a rapid rise. She’s won both the Next Big Thing award at the FBi SMAC Awards and triple j’s Unearthed competition, which netted her a slot at the dance music festival Listen Out. She’s even been tipped as a rising star by U.K. publication Wonderland Mag and was named one to watch by Ticketmaster. Building on this momentum, she’s since joined Aussie grime icon Chillinit on his sold-out national tour, has shows coming up with the billion-stream rapper Masked Wolf, and will headline Sydney’s Spilt Milk festival in September.

Most recently, Spotify’s A1 playlist brought A.GIRL together with Chillinit and another homegrown hip-hop artist, Day1, to launch a limited-edition menu with BUTTER, a hybrid fried chicken, hip-hop, champagne, and sneaker venue. (Fans can indulge in the custom menu’s offerings through the end of June at BUTTER’s four Sydney locations.) A.GIRL’s creation for this menu is the “A.GIRL Nashville Sandwich,” a spicy fried chicken sandwich with buttermilk ranch, a fried runny egg, and lettuce.

“I had a long think about it, and I was like, what is missing from burgers that I always add when I go home?” she told For the Record. “Like, how do I personalize? The runny egg. I don’t know if it’s a Maori thing, a Pacific Islander thing, but we always put runny eggs on everything. So I was just like, chicken sandwich with a runny egg—that’s a wrap!” 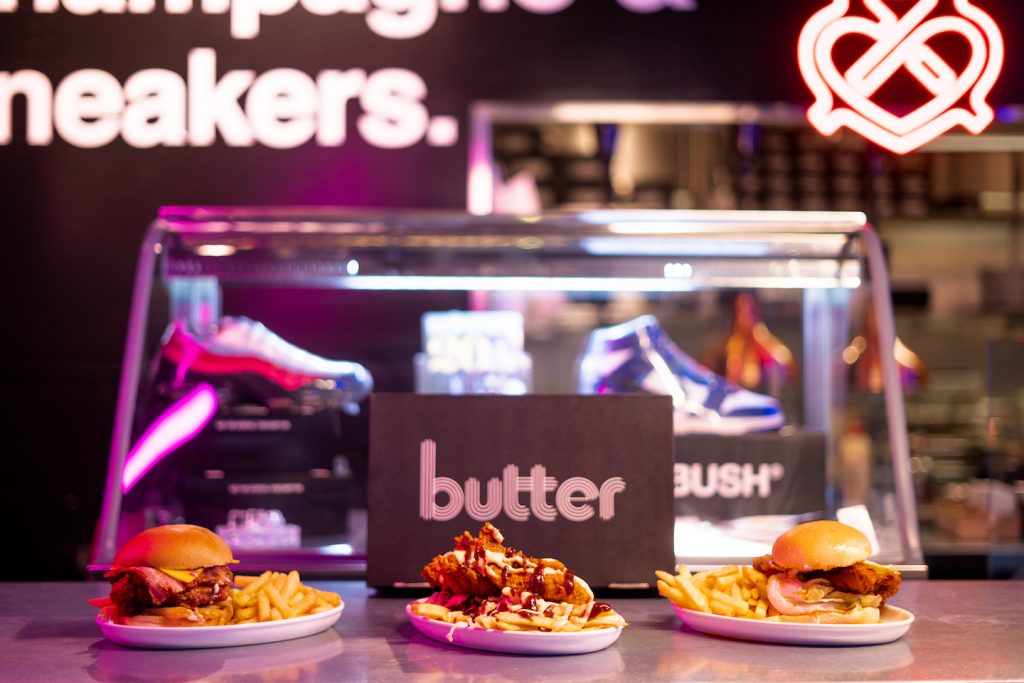 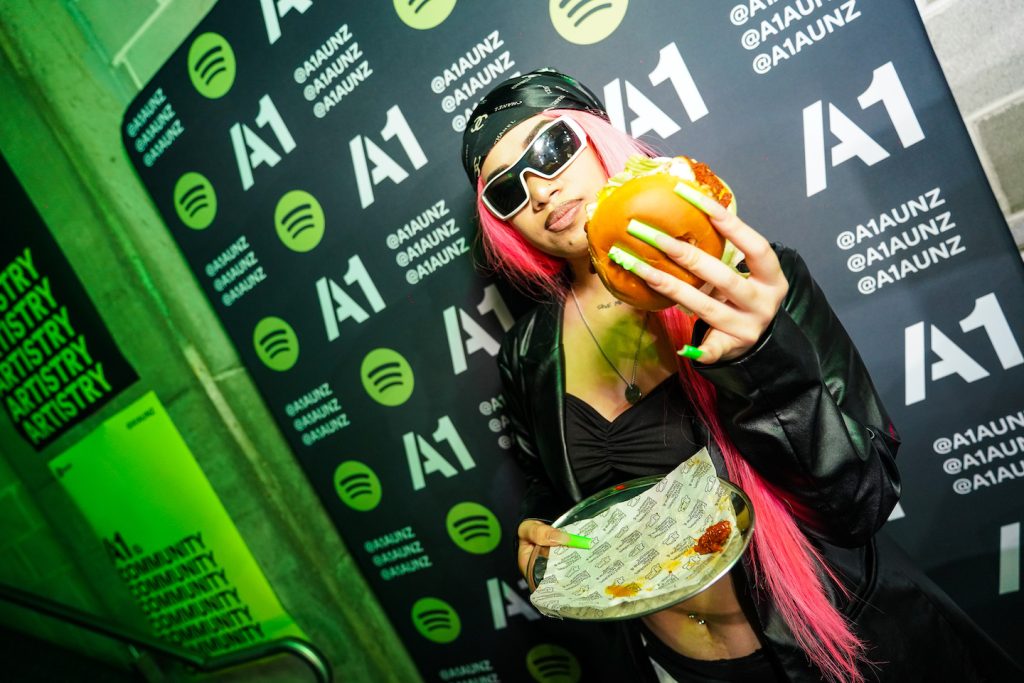 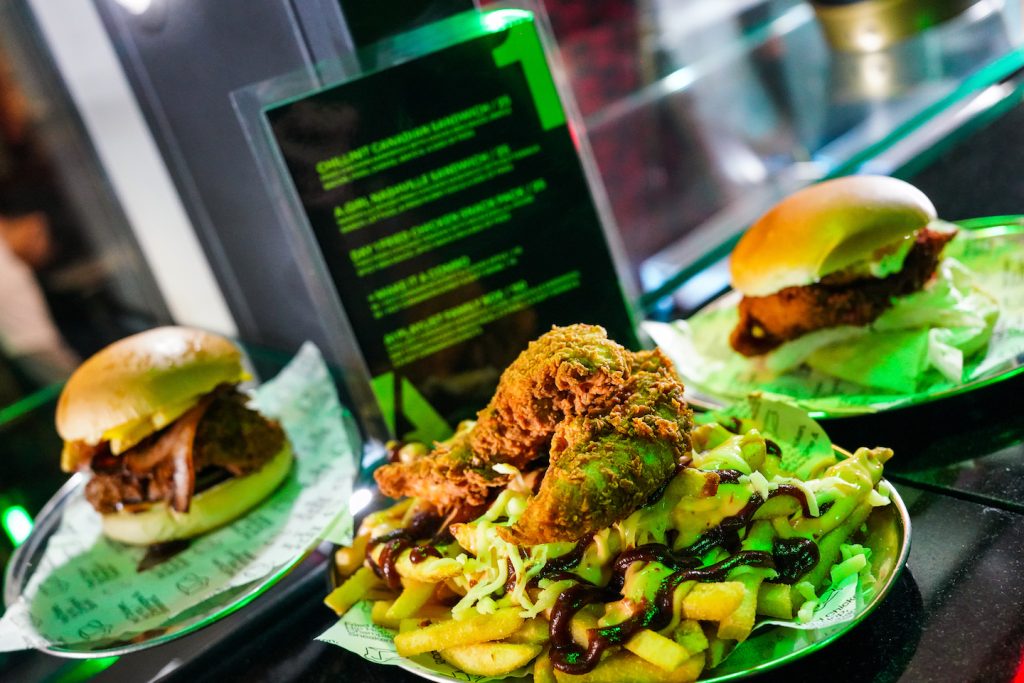 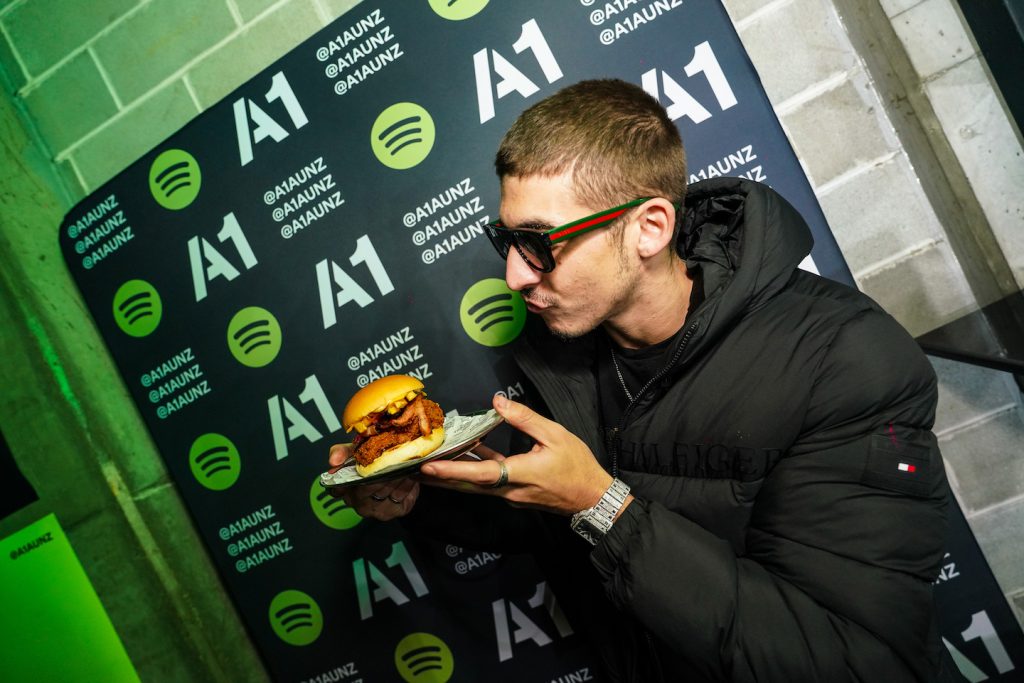 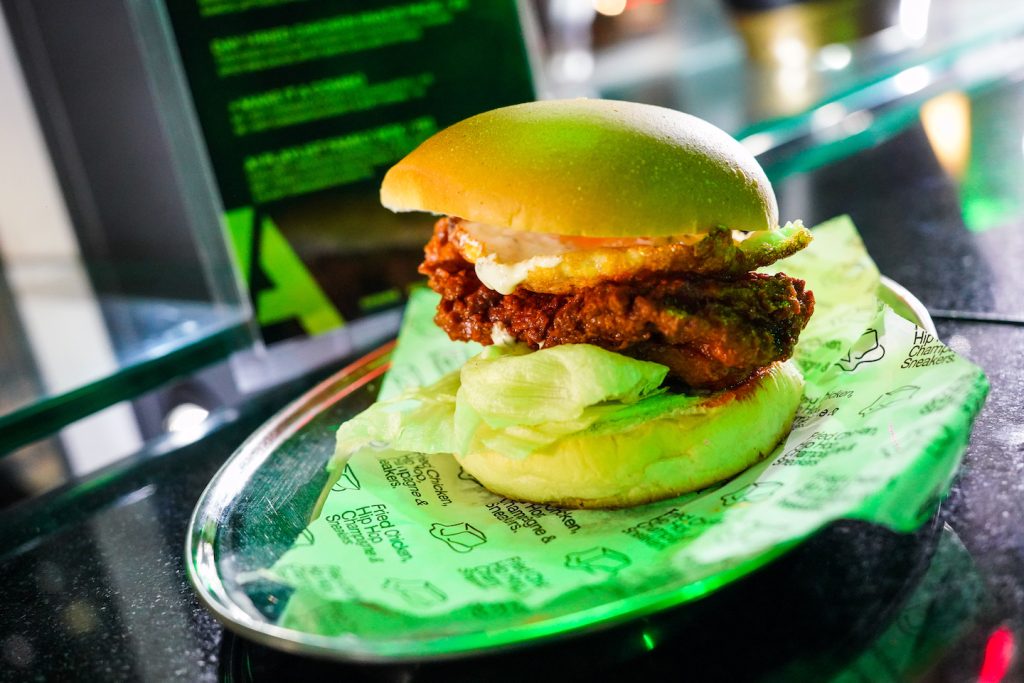 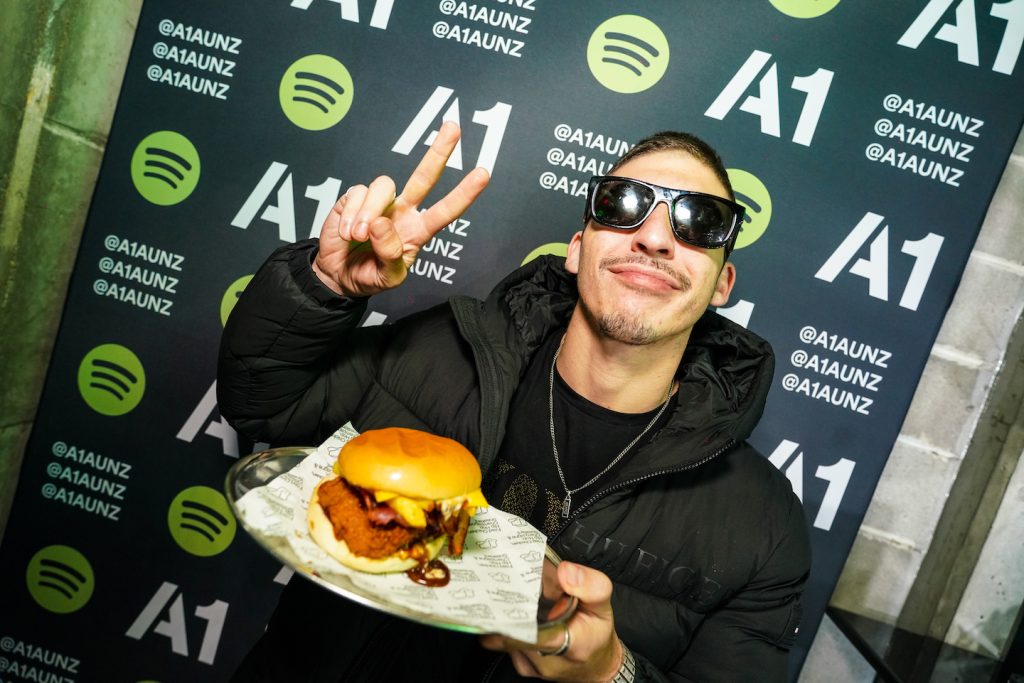 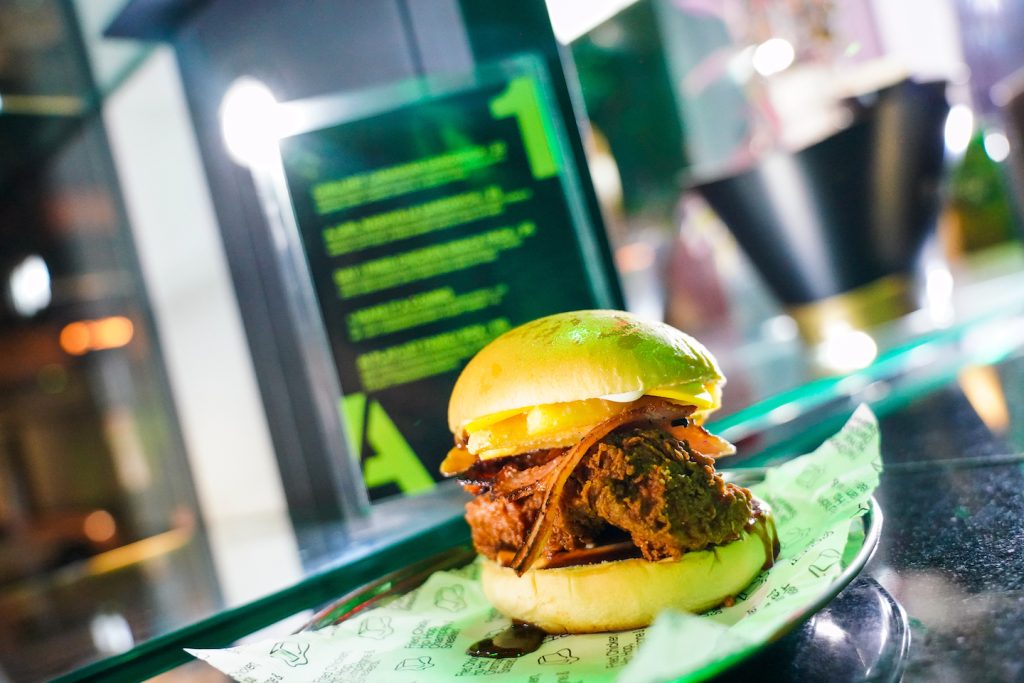 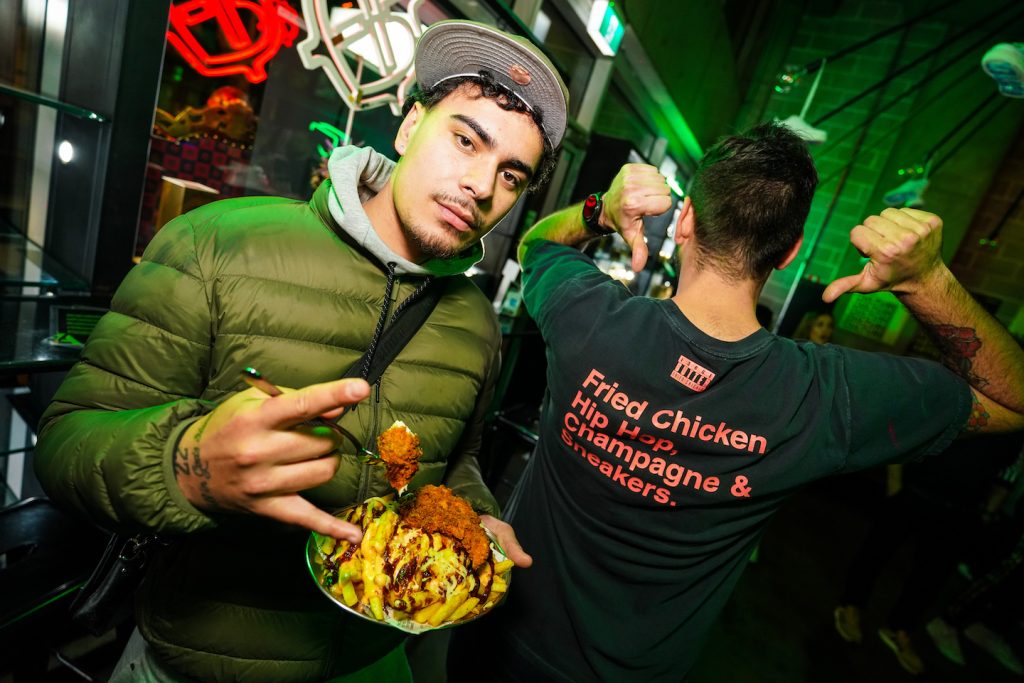 Her sandwich isn’t the only thing she’s personalizing these days—A.GIRL has big dreams to export Aussie rap to the world in her own unique way.

What is unique about the rap and hip-hop scene in Sydney?

In Sydney, I think we bring our own culture to hip-hop, but it took a while for us to develop our own culture. We were sheep following America and London for a bit, but we have this whole eshay culture about us; we’ve got this whole brand that we can stand solid on. And it’s taken us a minute to get there. But people like Chillinit, people like A1, people like ONEFOUR, 100%. Australian hip-hop is a full thing now that other people can jump on and be like, oh, I support. I can’t get this anywhere else in the world but Australia. It’s pretty unique how we’ve kind of come into our own and then we all kind of did this like 360. But you know what? Our accent is hectic, the way we dress is hectic, our tn’s are cool, everything that we’ve done back in the day and brought back to life, times ten.

Why should people from around the world tune into the music coming out of the area?

Because of American hip-hop, we know there’s food stamps over in America; we know that there’s Section 8 housing; we know all of those like little things from rap culture in different places. I feel like it’s time for others to learn about the things that we have to deal with, Centrelink, houses—things that are in Australian culture that Australian people can relate to. But it might take the world a minute to get onto what we’re saying.

Who are some of your biggest musical influences?

Definitely The Weeknd. Love Him. I’m not sure if I adapt that into my own sound or music, but his demeanor, his presence, how he carries himself as an artist, for sure. Freddie Mercury, weird one, but bro, he’s just him. No matter what he does—getting people to sing weird ad-libs back to him? But he’s just so undeniable wherever he goes. And I think he had the whole world against him at one point. It must have felt like it, you know? And he was like, f— it, you know? And I just love him for being that. Also Doja Cat. Obviously.

How did you find your voice in hip-hop? What role did music play in your upbringing?

I think by pushing through the noise and just kind of disregarding everyone, even if they had something good to say about me. I was just like, for now, while I’m trying to find myself in this male-dominated hip-hop realm, I literally only should listen to me. And that’s why I did songs like “Vision,” where I spoke about the differences in areas and area beef.

When I first started coming out as a rapper, I was touching on topics that I felt needed to be addressed. And topics that I feel like other rappers were shying away from. And I know that if I listened to anybody outside of my own brain, I would have just steered left and done some commercial sh*t, and I wouldn’t have stuck to what felt true. But it took me a minute to find my voice in hip-hop, because as much as I say that I didn’t listen to anybody, I did. You know, I let people get into my head and it was very f—— hard.

What is your biggest piece of advice to aspiring artists?

Stay true to yourself. It’s really easy to get caught up in all the high pressure, easy to get caught up in the hype. No one prepares you for when you get to that point. The lights and cameras are in your face. Everybody wants to know your name. Everybody wants to get a picture. Nobody ever really keeps an 100 with you about how overwhelming that can be, about how easy it is to kind of just fall into that trap of pushing everyone that’s close out of the way.

So stay true to yourself, remember who your day ones are, remember why you started this journey in the first place.

Catch A.GIRL on A1 below.

‘A1: The Show’ Brings a New Side of Australian Hip-Hop to Listeners