In March 2019, Spotify took the bold step of filing a complaint against Apple with the European Commission for anti-competitive behavior and abuse of dominance in the music streaming market. For years, Apple has consistently tilted the playing field in favor of its own services to disadvantage rivals, stifle innovation, and make it harder for companies like Spotify to compete.

Nearly every consumer now owns a smartphone and uses it as their primary means of accessing services on the internet, which means everyone is impacted, putting the internet economy at risk.

Fast-forward to today, and the European Commission, while having built its own strong case against Apple over the last few years, still hasn’t brought the case to conclusion. This is especially problematic as we’ve seen Apple seek to circumvent or outright defy regulations in other markets around the world in order to evade meaningful changes to their behavior.

This is why Spotify CEO Daniel Ek—joined by Global Head of Public Affairs Dustee Jenkins, General Counsel Eve Konstan, and others from our team—traveled to Brussels, the seat of the Commission, for a full day of meetings and events earlier this month. This included time with key Commissioners to ask that they deliver a robust decision against Apple as soon as possible, because the internet moves fast, and every day that passes without any action erodes companies’ ability to innovate on behalf of consumers—not just in Europe, but around the world. Remedies must be levied to drive impact. Otherwise, Apple will have no real incentive to change.

But the Apple case wasn’t the only issue on our agenda. We shared our thoughts around the remarkable work the Commission has done to advance Europe’s digital economy, and the leadership role it has taken with the recent landmark tech regulations of the Digital Markets Act (DMA) and Digital Services Act (DSA). While we applaud these efforts, we don’t see the DMA specifically as a substitute to the case we filed in 2019. Instead, we view it as a much-needed complement and believe that a decision on our case is still key to ensuring significant and lasting change.

We also spent time with students at Vlerick Business School, where Daniel discussed leadership, the importance of healthy debate, the challenges of continuous innovation, and Spotify’s relentless focus on speed and building culture and resiliency. He also talked about his desire to unleash Europe’s entrepreneurial potential and the role of business in driving meaningful solutions to some of society’s biggest issues. And realizing this is only possible when there is a level playing field. 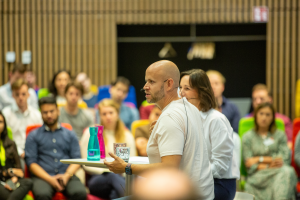 The day concluded with a Spotify-hosted reception that featured a fireside chat with Daniel moderated by renowned Brussels-based commentator Shada Islam and a musical performance by award-winning Belgian singer-songwriter and RADAR artist Meskerem Mees. During the conversation, Daniel reaffirmed just how critical it is to keep fair competition at the top of the Commission’s agenda, given the billions of developers and consumers who are at the mercy of gatekeeper platforms like Apple. 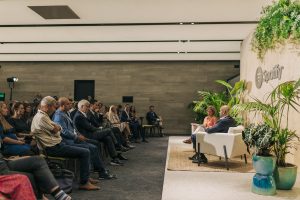 Fair and open platforms enable better consumer experiences and allow developers to innovate, grow, and thrive. Spotify believes we have a duty to ensure that we’re helping to pave pathways to success for start-ups out there just looking for a shot. So we’ll continue to engage on these topics and advocate for an ecosystem in which fair competition is not only encouraged, but guaranteed.

Consumers and Innovators Win on a Level Playing Field

Spotify Shares Our Vision To Become the World’s Creator Platform