Though Hack Week was again held virtually, employees came together on Slack, Google Hangouts, real-time note-taking, and our virtual Hack Week platform to push each other on ideas related to amplifying the company’s climate action, sustaining justice for people and the planet using our platform, helping Spotify reach net-zero emissions, and more. Each individual chose a project that personally excited them, though these are not projects that Spotify is currently pursuing—or that even relate back to each person’s work. This year, the For the Record team spoke to five hackers who worked across these themes on four climate-related projects. 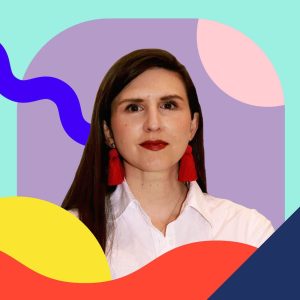 Meredith Humphrey, a Senior Project Manager on the Studios Program Management Team,  participates annually in Hack Week, carving out a day or two to work on something unrelated to her day job. But this year’s theme inspired her to engage for the full five days. She worked together with a large team to create a tour CO2 calculator, an idea that could help musicians and podcasters going on tour calculate the environmental footprint of their travels. The goal? According to Meredith: “To help them collect that data really easily and enable them to offset it if they want to.”

How did the Green Tour Planner come to be?

I’ve been thinking about carbon emissions a lot in my personal life. I live in Sweden, but I’m from the U.S., so I take a lot of long-distance flights while also looking to reduce my footprint. In October, I saw tour dates for one of my favorite artists pop up on my Instagram, and I had two thoughts simultaneously: one was, “I’m totally going to this tour,” and the other was, “This is so many flights.” So I was wondering whether bands know their own footprint and if they’re trying to reduce it? Then I wondered how Spotify could help them get that data because it’s really hard to find. I want creators to feel empowered, know their data, and be able to take action.

So when the theme for Hack Week was announced, I created a team. As it so happened, there was another Hack team also focused on helping artists plan their tour from the beginning and reduce their footprint through better routing or by offering different modes of transportation. We realized that the objectives were very similar, and our team had a few skills they were lacking in and vice versa. So we combined and it worked really well. I can’t thank them enough for how generous and collaborative they were—it was really in the Spotify spirit.

Even though we were a large group, there was still plenty to be done. In the end, we created designs for a tool that could help someone plan the most efficient tour route possible—hopefully hitting as many locations as you can in the least amount of time while not sacrificing profit. We mostly came up with a design, how we wanted it to work, and what we think it would look like for creators. 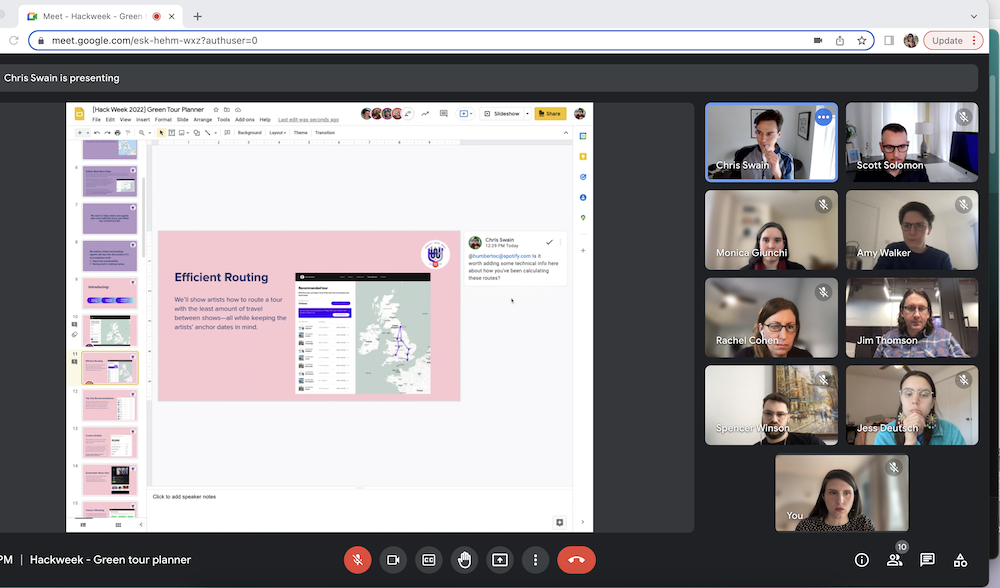 You’ve been hacking for many years. How did the virtual Hack Week work for you and your project?

Normally, you’re all hacking together in a room. Because our team was in a couple different time zones, there were basically two to three hours a day where we were all in a Hangout together and talking and collaborating. We’d use [digital] Post-its and stickies and sketch out our ideas. And then we’d go and work individually during our work days. And throughout that we’d Slack. I would be designing slides while somebody else would be sketching out the product, while somebody else was researching artists who had done recent tours, while somebody else was calculating the footprint of that tour. So everyone had their individual tasks, and then we convened for about two hours a day. Being virtual meant I got to hack with people I would have never hacked with before—normally, I only reach out to people in the same office. But this year our team was a lot of Stockholmers, people in London, and a bunch of people in New York.

Why do you think it’s important for Spotifiers to hack on this topic—and bring it forward into their everyday work?

I think Spotify is in a really unique position of having data that artists could use to plan efficient tours. If we can tell you these are the 10 cities you should go to with the most fans, you can get the most out of it with the least amount of travel. I think that we can help encourage creators to reduce their footprint, and enable them to still tour—and then maybe engage fans and spread the word through them. I think it’s win-win all around. It’s hard to say how it will come into our daily lives yet, but I think it will impact how we measure our future targets.

This year, the For the Record team spoke to five hackers who worked across four climate-related Hack Week projects. Check out each story from Mauricio, Serah, and Gary and Stephan.