K-Pop fans, Spotify has a treat for you. Today, South Korean boy band TOMORROW X TOGETHER is releasing its fourth mini album, minisode 2: Thursday’s Child, and Spotify listeners have access to an exclusive enhanced version of the album.

This new five-track album follows the story of the boy who fell in love in the band’s previous album series, The Chaos Chapter. In minisode 2: Thursday’s Child that boy experiences a breakup with his first love. Fans will experience three themes (hate, end, mess) as they listen to the group’s tracks, which feature a mix of hardcore rock, hip-hop, and R&B.

The enhanced album, available only on Spotify, includes never-before-seen content. Fans have access to new videos, storylines (which are personal written commentaries from the band on each track), and audio liners, where the band members give insight into the songs. The enhanced album also features videos of the individual members of the group talking about the fun they had and the memories they shared while creating the new music. 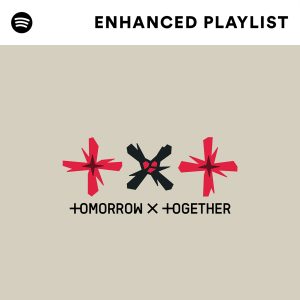 “We are thrilled to present this new, immersive content to MOA and all listeners on Spotify,” said TOMORROW X TOGETHER’s leader, SOOBIN. “We put tremendous effort into making our new album and collaborating with Spotify, so we hope you enjoy the special behind-the-scenes experience and feel a deeper connection through our exclusive, personally curated content.”

For the Record chatted with members of TOMORROW X TOGETHER to learn more about their new album.

What can fans expect in the new album, minisode 2: Thursday’s Child?

SOOBIN: Through this new EP, we showcase a side of ourselves that we’ve never shown before. We tried to express how one could be corrupted and changed by his first heartbreak. The lead single “Good Boy Gone Bad” has some fantastic choreography that’s sure to make a lasting impression in your minds, so be sure to check it out!

In what ways does the enhanced album share more about the intent behind your new music for fans and new listeners worldwide?

SOOBIN: I hope our fans, MOA [Moments of Alwaysness], will be able to dive deeper into the EP as they listen to the behind-the-scenes stories and the episodes that we reveal for the first time.

YEONJUN: We all had a great time discussing the album in such depth. In the process, I’ve definitely grown more attached to every song.

BEOMGYU: We had a heart-to-heart talk on each of the tracks from the album, and I hope our MOA will love it too. Also, I really enjoyed thinking back to the emotions I had while working on and recording each song.

TAEHYUN: It’s some great content. We go into detail about how each member tackled the recording process. Listening to how each song came to be definitely makes me appreciate them more.

HUENINGKAI: I have so much love for this EP, especially with all the effort and passion we all put into it. It’s our first unit track, so the producer and YEONJUN and I talked a lot about how we want this track to feel. I hope our intentions are delivered to you successfully.

What messages do you want people to take from your music?

SOOBIN: Through music, we always strive to give voice to what many people feel and experience throughout their lives. We pursue music that many people can empathize with and relate to. We would like to be remembered as artists who are not confined by genre. We want to become artists who linger on in your minds even as time goes by.

What figures have most influenced your music and your artwork?

SOOBIN: I watched a lot of shows that deal with love and heartbreak. I took these works as inspiration to delve into and understand these emotions with more depth.

HUENINGKAI: Since I was a child, I have admired my dad. And I have been inspired by many artists, like Bruno Mars and Christopher, since I was a trainee.

YEONJUN: For this album, I was inspired by Post Malone’s music.

BEOMGYU: I referenced some TV shows as well, but I also think all people go through heartbreak or farewell in one form or another, whatever that may be. While working on this album, I tried to think back and put myself in those shoes.

TAEHYUN: I was inspired by The Weeknd’s albums and by a friend who had recently been through a breakup.

As you look to TOMORROW (the future), what are your goals as a group TOGETHER?

As a group, we still want to meet and enjoy being with MOA from all over the world.

Spotify Celebrates K-Pop With a Relaunch of Its Flagship Playlist, Now Called ‘K-Pop ON! (온)’